Skip to content
The Path Is Not The Way - Further In, Farther Out

The Ersity of Was is a remote wilderness learning area located in the heart of Southwestern Idaho’s rugged Owyhee wilderness. It is home to some of the most vast and scenic examples of canyon and high desert environments available in the region, as well as abundant wildlife. Many would call this landscape sparse or inhospitable, but for those with the spirit of adventure it proves to be much more. 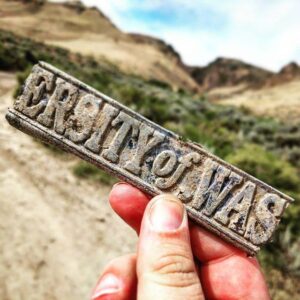 How Did Ersity Get Named?

Over the last two years of visiting a place many times a week you might say that I have a certain familiarity with the place…despite still only knowing a little of its real story.

The time I have spent there has changed me; I continue to learn many lessons in this challenging ecosystem not only about nature but also existence itself.

Other than walking and just enjoying the scenery and smell of sagebrush I tend to pick up a lot of trash. I’ve started leaving garbage closer to the road hoping to discourage people from thinking there’s anything worthwhile further in, honestly. And it’s kind of funny what I eventually take or leave; how at a certain point a piece of garbage is old enough to be considered relevant to the place as an object of historical import.

Throughout my visits it’s also been interesting to note how garbage travels. Detritus Migratus.

For instance, the little yellow plastic flowers I thought were cute enough to leave alone somehow wander miles into the brush to be found months later to my amazement. And then later still picked up by someone and placed somewhere else.

The winds of change ever move us. The hands that hold us change our place in life. Lessons.

One such piece of flotsam is responsible for the name I’ve come to call this place whenever I am inevitably asked for its location.

I most imagine it broke off of a jeep when it hit hard on the bottom of one of the deep ruts near the crossroads where I found it. ERSITY OF WAS.

Doubtlessly from a sign for the univERSITY of WAShington but funny to me for it’s tongue in cheek nod to the past tense.

I almost brought it home but thought better of it, being cautious of taking things from places that belong to the place not me. So instead I placed it on the large boulder near the intersection of paths. It made me so happy to see it greeting me like a lone friend in a desolate place.For months it would blow off or someone would move it and I would put it back until finally one day it was just gone.

I was a little sad about it, oddly enough for such a small thing. But that is a lesson this place has taught me time and again, and maybe why others seek it too: appreciate the magic things that touch your life while they do, because none of them are forever, but we can carry the joy of them with us until it’s time to set them down.